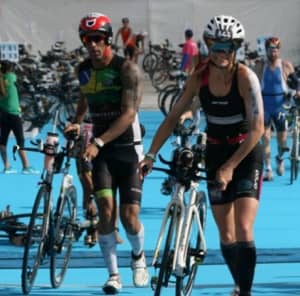 Brick sessions are ideal for getting our body used to triathlon transitions, but what happens physiologically when you swap sports? Sarah Green, consultant rehab physio for Six Physio, explains…

As a triathlete, we all know that transitioning into the next discipline is a key part of the event, as by maximising efficiency in transition, it can save minutes on our overall time. But why so often does it feel so hard to get going on the bike? And why when we spend hours a week running, do our legs feel like jelly when running after the bike?

What happens to the body in T1:  The swim to bike transition

When swimming, the majority of work is done with your upper body. Muscles including your lats, deltoids, trapezius, triceps and biceps work much harder in the water than they do in any other discipline. Depending on the length of the event, when swimming you are essentially lying on your front for up to 70 minutes or longer. This sudden change of position, going from prone to running into transition and jumping on a bike causes blood to be shuttled from your upper body, into the lower body and causes a sudden increase in heart rate. As a result, the effort becomes anaerobic and we immediately go into oxygen debt. Our body therefore has to rely on energy sources that are stored in the muscles that is reserved for high intensity, short bursts of activity. Ideally these glucose stores in the muscles should be conserved for later on in the bike, or the sprint finish, not used up early on in the event or in transition.

The other effect of the sudden change is blood shifting from the upper body to supply the lower body quads, glutes, hamstrings and calves can often result in postural hypotension, whereby when getting out of the water it is not uncommon to feel dizzy and disorientated. Practicing the transition between swimming and cycling will enable development of the aerobic system needed to facilitate a swift and efficient change from swimming to cycling.

Beat dizziness after the swim

What happens to the body in T2: The bike to run transition

There are a couple of reasons as to why it can take a few minutes to get our running legs efficiently working when coming off the bike. Firstly, good hip extension is essential to ensure your glutes, the opposite muscles to hip flexors, are activated and stabilise you when running.

However, after cycling our hip flexors often become very tight due to the position on the bike and this can impede your running technique. This tightness can make it almost impossible to get the glutes firing correctly ready for the run. Running without engaged and strong glutes can very much limit performance as it prevents your ability to impart force into the ground as you extend the hip. The physiological reason for this lack of glute activation is due to a neurological phenomenon called reciprocal inhibition. The effects of this can be seen where opposing muscle groups should work together to facilitate movement, but fail to do so when excess tightness or over-activity is held in one area.

Secondly as you start the run phase, your nervous system is still geared towards controlling the mechanical movements required for cycling. It takes time for the brain and spinal cord to adjust to the completely new patterns of neuromuscular coordination needed for running, causing you to feel sluggish and uncoordinated during this adjustment period. Muscles often begin to feel less fatigued after a few minutes.

Similarly to T1, the change from one activity to the other induces a redistribution of blood flow to the propulsive force-producing muscles in the legs. Muscles that are activated more for running such as the glutes, may have to wait for a short period of time to receive augmented flows of blood. During this time, we are at risk again of working anaerobically and therefore using up the muscles glycogen stores. As the glycogen stores are used up we lose the ability to work at a high-intensity effort.

There is variable evidence on the use of brick training and why it is beneficial. However, one area of benefit cannot be argued with. Brick sessions offer the uniquely specific opportunity to work on movement and technique based issues which occur at the start of the run. Use brick sessions to perfect running form, focusing on glute activation, correct posture and ensuring the best muscles groups can be activated for running.  The human body is a very adaptive mechanism and generally if we practise and practise, and apply a training stimulus slowly and progressively over time, our bodies will adapt. We are therefore less likely to use our anaerobic system in transition, and far more likely to have a quicker, smoother and less painful transition in both T1 and T2.