The Greatest show on earth is almost over, but Tim has lifelong memories…

Tim had one of the best views of the Olympics…….from the Men’s locker room at Wimbledon!

I was able to experience the Olympics from a fantastic vantage point of providing Physiotherapy support to the Mens Players during the Olympic event. These guys are incredible with the attention to detail they show in all areas of looking after their body and mind, trying to gain that vital advantage that makes the difference between Gold and going back onto the tour with no medal to show. From their pre-match stretching and warm up routines to the post match recovery – Nothing is left untouched and Physiotherapy is a vital component to this.

Prevention and catching niggles early is definitely the call of the day, as one significant injury can rule them out for months and seeing as the tour last for 11 months of the year – This simply something that they can’t risk.

The mix between the players of camaraderie and competitiveness proved an interesting mix, with players at one point joking with training partners before being thrown into a tight tussle on court.

Seeing what it meant to all of these players to have the opportunity to play for an Olympic medal bought the competitive aspect to an even higher level, and seeing the different players vary between the jubilation of getting one step closer to their dream of a medal with being totally distraught when their dream has been dashed until next time (Or in some cases forever!). A totally different aspect of what they are used to though was instead of one player taking all the tournament spoils there were three medals given out. With Andy claiming gold it was the highlight of the week (For Team GB anyway!).

And here is Tim with that GOLD medal…….. 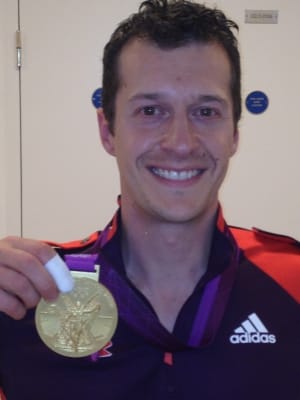