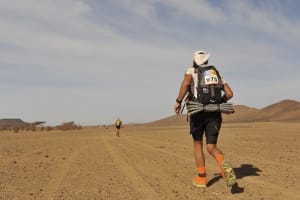 It has been called the “The Toughest Footrace on Earth”, so like the other 1000 or so mad runners from around the world, I lined up on the start line of the 29th Marathon des Sables in southern Morocco to take on the Sahara on Sunday 6th April, 2014, somewhat nervous but full of excitement.

The race consisted of 244km over 6 stages, the longest being 81km and the shortest, a 7km charity walk at the end of the week, through massive sand dunes, across dried up lakes & river beds, up and down jebels (hills) and over lots and lots of rocks, whilst carrying all our own food and kit – about 10kgs plus water; and sleeping in open sided Berber tents! The organisers made sure we kept hydrated with about 65 litres of water and copious amounts of salt tablets to combat dehydration in the 35 – 45 degree temperatures of the desert. There were more than 100 withdrawals due to dehydration, blisters and various other ailments as the course was made particularly tough this year by the French organisers. All my planning and training over the last year paid off and I successfully completed the biggest goal of my running career. It was pretty tough, hot and physically and mentally demanding but you just had to keep putting one foot in front of the other to make it to the finish. I ended up finishing in the top 25% and as a bonus was first Kiwi!  The spirit and camaraderie of all the competitors, and the organisation of the event was fantastic. Overall an incredible experience and I would thoroughly recommend it to anyone crazy enough to take it on.

Now, six months later I am fully recovered, both in mind and body, and eagar to repeat the whole experience again. The MDS is an amazing race, and I was lucky (or rather mad) enough to get another entry – always difficult, but this time I want to go just a wee bit harder and see what I’m capable of. With about four months to go, my training is starting to ramp up and winter is kicking in. Not ideal conditions to train for an ultra in the desert but you just have to get out there and make the most of it. I’m covering about 40 miles a week at the moment with no problems, and hopefully I will be working up to about 80 – 90 miles a week, with an increased load in the back pack, a few saunas and 10 hours of acclimatisation in the heat chamber to finish off with. After all that I should be well prepared (better be) to cope with the desert and with the help of Six Physio, injury free!!! I’ve found regular pre emptive massage has been invaluable in keeping me running with no major issues. And it feels good too!