What’s the worst injury if you’re a physio… a Bennett’s Fracture!

What’s the worst bone to break if you’re a physio?
The answer to that is your thumb! And unfortunately Alex Hunter managed to do just that six weeks ago!

“I think that many of my patients over the years will be smiling in satisfaction as the thumb that painfully kneaded their glutes/back/neck decided to snap in half.

“I was holding a tackle bag whilst warming up for a rugby tournament in Stockholm, when one of my beloved teammates head’s crashed into my poor hand. Looking down at what I thought was a sprained thumb, I was surprised to notice one of bones seemed to be poking out the wrong way! 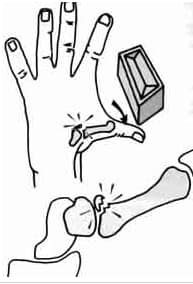 “I had what’s called a ‘Bennetts fracture’, where the 1st metacarpal i.e. the long bone in your hand that attached to the base of your thumb, breaks and then dislocates out of joint. Hence the funny looking lump!

“Not surprisingly I was straight to the medical tent and was in hospital ASAP once landing back in the UK.

“Because a Bennett’s fracture is ‘intra-articular’ i.e. it breaks through the joint rather than just through the bone, it’s pretty important I had this fixed up pretty soon. So three days later I was on the operating table having two long wires drilled into my thumb to hold the fracture in place while it healed. These wires actually came out of my skin, for ease of removal in four weeks time.

“So four weeks later I trundled back to my surgeon(the fantastic Mr Livio Di Mascio). He sat me down sawed of my cast then produced a large pair of pliers. He then told me very calmly that he does this to twelve year olds, so I shouldn’t be a baby. Then with a little elbow grease, he pulled the wires straight out of my hand! I didn’t even get a lollipop afterwards…

“This was then X-rayed again to make sure it was well healed and  I was put in a splint by the lovely Lizzie Bond, Six Physio’s specialist hand therapist.

“Two weeks on and I’m out of my splint. My hand looks like a small childs and is about as tanned as an polar bear. So now it’s on to plenty of strengthening, stretching and massage.  All going well and doing as I’m told with my homework, my thumb will be back terrorizing my beloved patients in no time!”